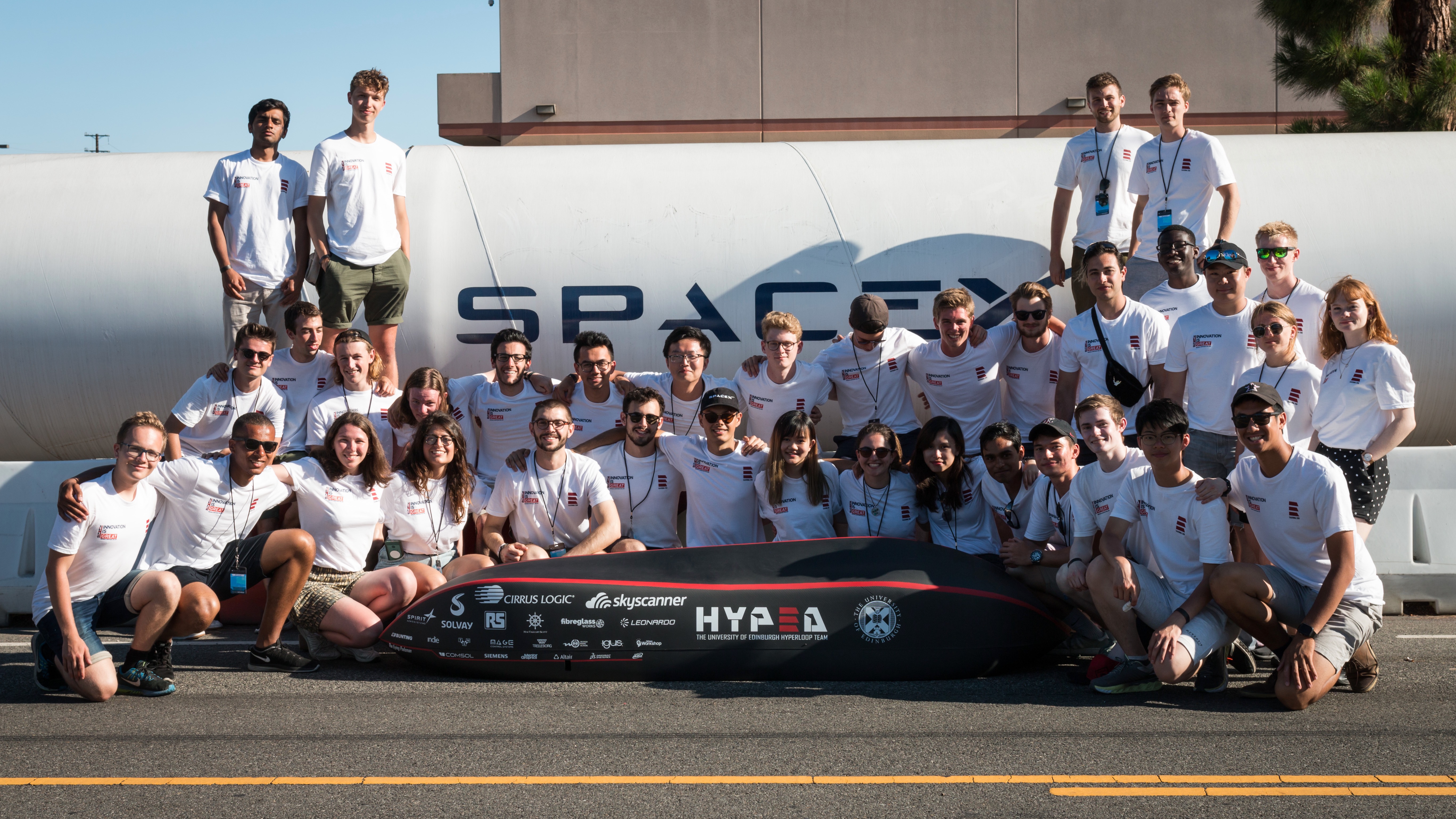 In July 2019, HYPED represented UK at the SpaceX Hyperloop Pod Competition with their newest prototype, The Flying Podsman.

After 10 months of hard work from some of the brightest and most committed undergraduate and graduate engineers at the University of Edinburgh, HYPED - the University's Hyperloop Team flew to Los Angeles, California to compete at the fourth SpaceX Hyperloop Pod Competition and present to the world their third prototype The Flying Podsman. Their goal to get their pod into the vacuum tube, purpose-built to test Hyperloop pod prototypes.
‍
The Flying Podsman was the fruit of countless hours of design, prototyping, manufacturing and testing by a dedicated team of students all of which undertook the project alongside their everyday studies. This year the team continued working on improving their unique magnetic propulsion system as well as manufacturing an all new carbon fibre and aluminium composite chassis and all carbon fibre shell. The Flying Podsman was designed to be faster and lighter than in previous years whilst still staying true to the original philosophy behind the Hyperloop - virtually frictionless high speed transport.
‍
The team worked tirelessly in Los Angeles in the lead up to and during the Testing Week to pass over 120 rigorous tests set out by SpaceX to ensure the pod could safely be tested in the 1.2 km test tube built on the doorstep of SpaceX's headquarters. Ultimately, HYPED completed over half the tests before encountering some mechanical issues that prevented the team from progressing further.
‍
On 21st July, during the competition final, three finalists' pods run amongst 19 other teams present on the day. Although The Flying Podsman did not make it into the tube, the team was able to show their prototype to the general public. HYPED was praised for the extensive use of high quality carbon fibre components as well as for their fully working novel propulsion mechanism. The day was brought to a close by Elon Musk - the founder of SpaceX and the initiator of the Hyperloop concept.

The experience gained during the fourth edition of Hyperloop Pod Competition puts the team in a position better than ever to continue developing the technology that goes into their pods. HYPED strives to focus on reliability and innovation going forward. With the help of a newly set up advisory board of academic staff and HYPED alumni, the team will ensure high technical and organisational standards are maintained at every step.
‍
At this year's competition, only five teams were using magnetic propulsion with most of the prototypes’ propulsion systems being based on friction wheels. HYPED was the only team to feature Arc Synchronous Motors to spin their Halbach wheels with four other teams deciding to use linear induction motors. With a track extension promised for the next edition of the competition, HYPED’s consecutive use of magnetic propulsion is set to finally pay off, as the team’s prototype will be able to reach higher speeds, not being limited by the rolling friction of traditional propulsion methods.

More than just a technical team
‍
Part of the philosophy at HYPED has always been making Hyperloop a reality - to achieve this it takes more than a prototype pod. The team also has a dedicated outreach team that organises events around the country with the purpose of exposing school pupils to the applications of STEM subjects as well as proving that the Hyperloop is, in fact, a feasible concept.
‍
Last year the outreach team has successfully organised the first edition of National Competition, attracting student teams of all ages, as well as international entries. It has also worked in collaboration with an education start-up based in Macau to deliver summer teaching about the Hyperloop and run an Asian branch of its competition. With the start of the new academic year, HYPED’s outreach team will be expanding its projects in the UK. It will also be extending their influence internationally, having spin-off projects in Africa and Asia, thus greatly expanding the scope of its work.
‍
Everyone at HYPED is excited about the future and the team is committed to continuing the hard work put in during previous years. Watch this space.

Read other press releases in Newsroom