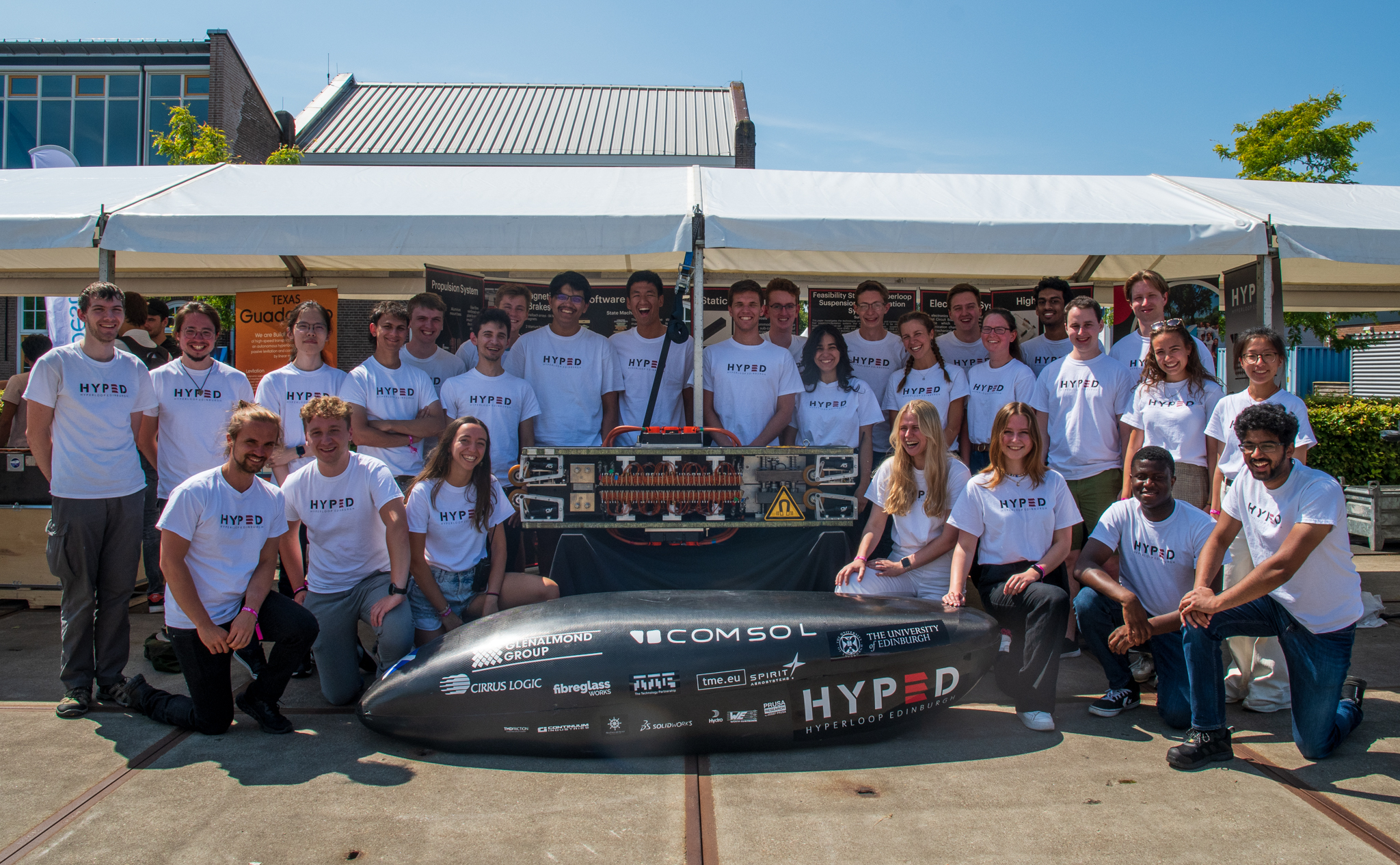 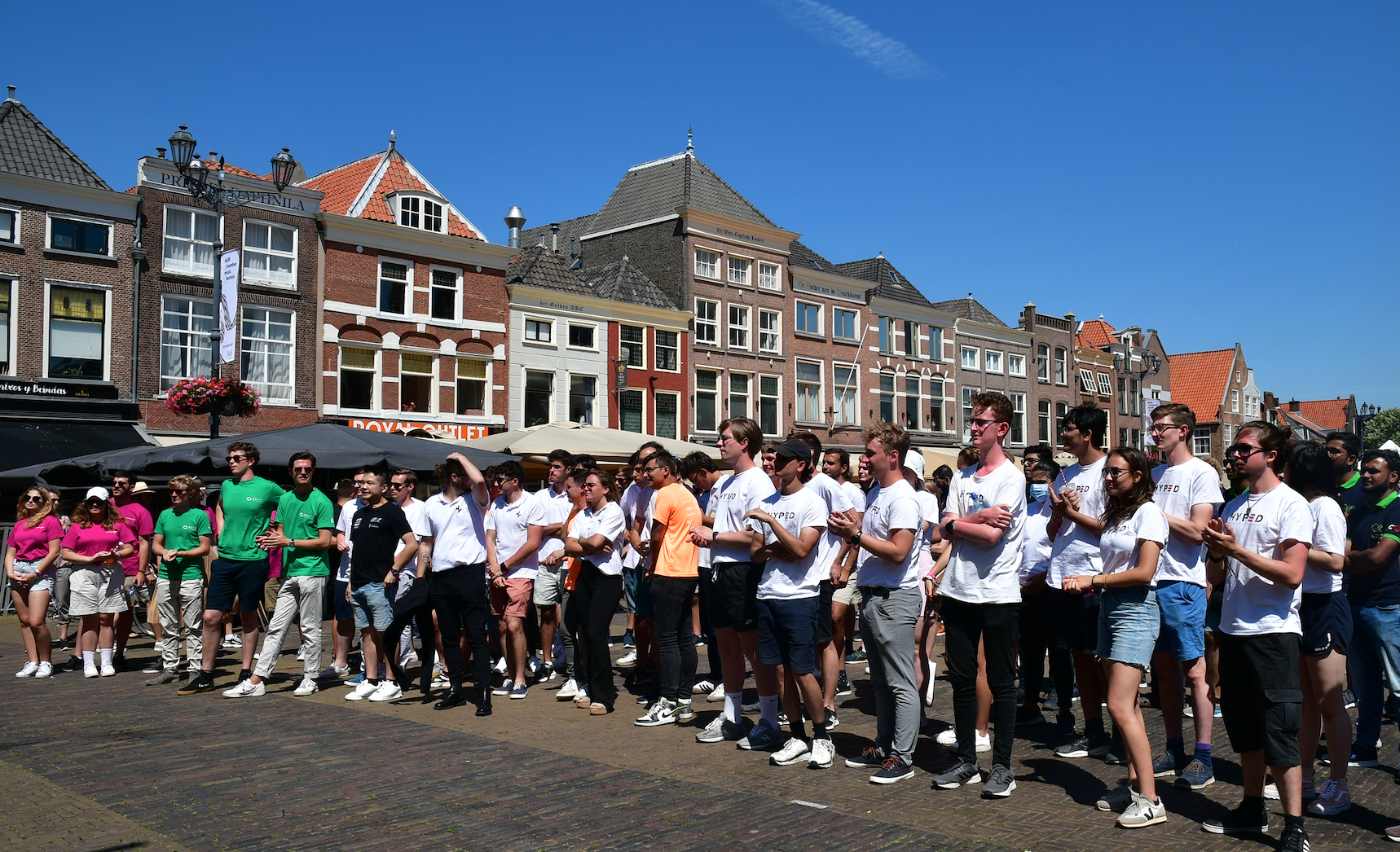 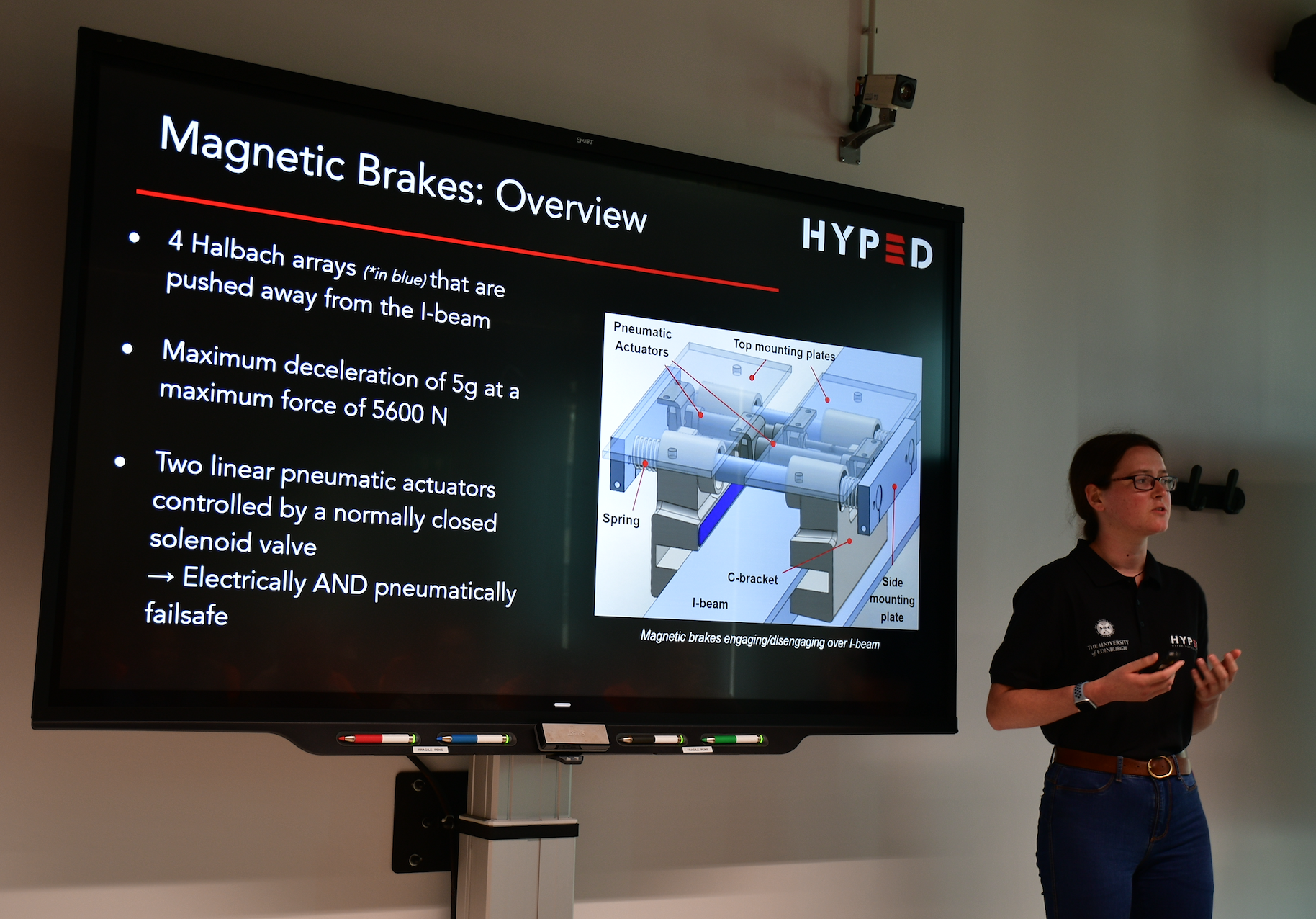 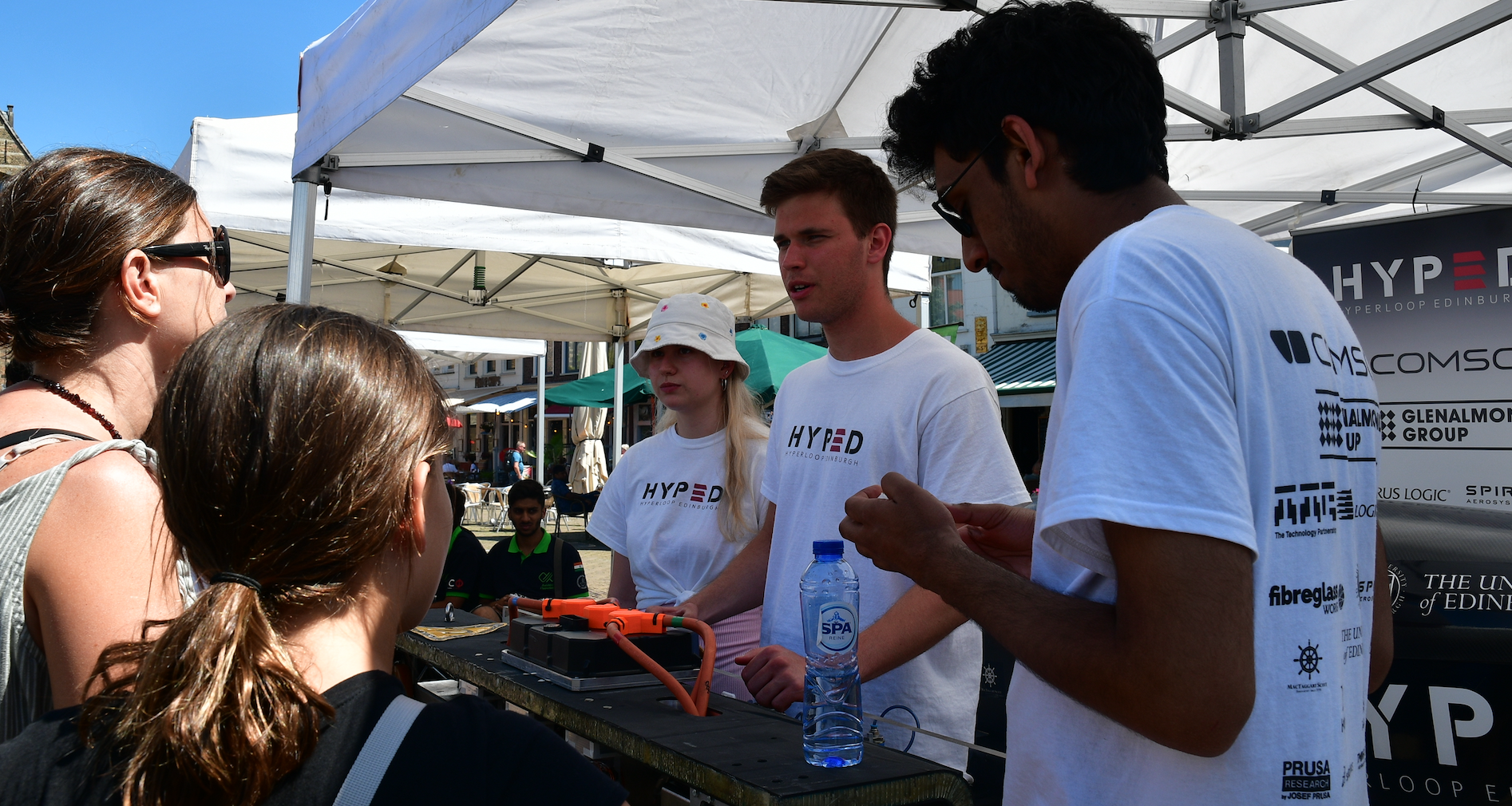 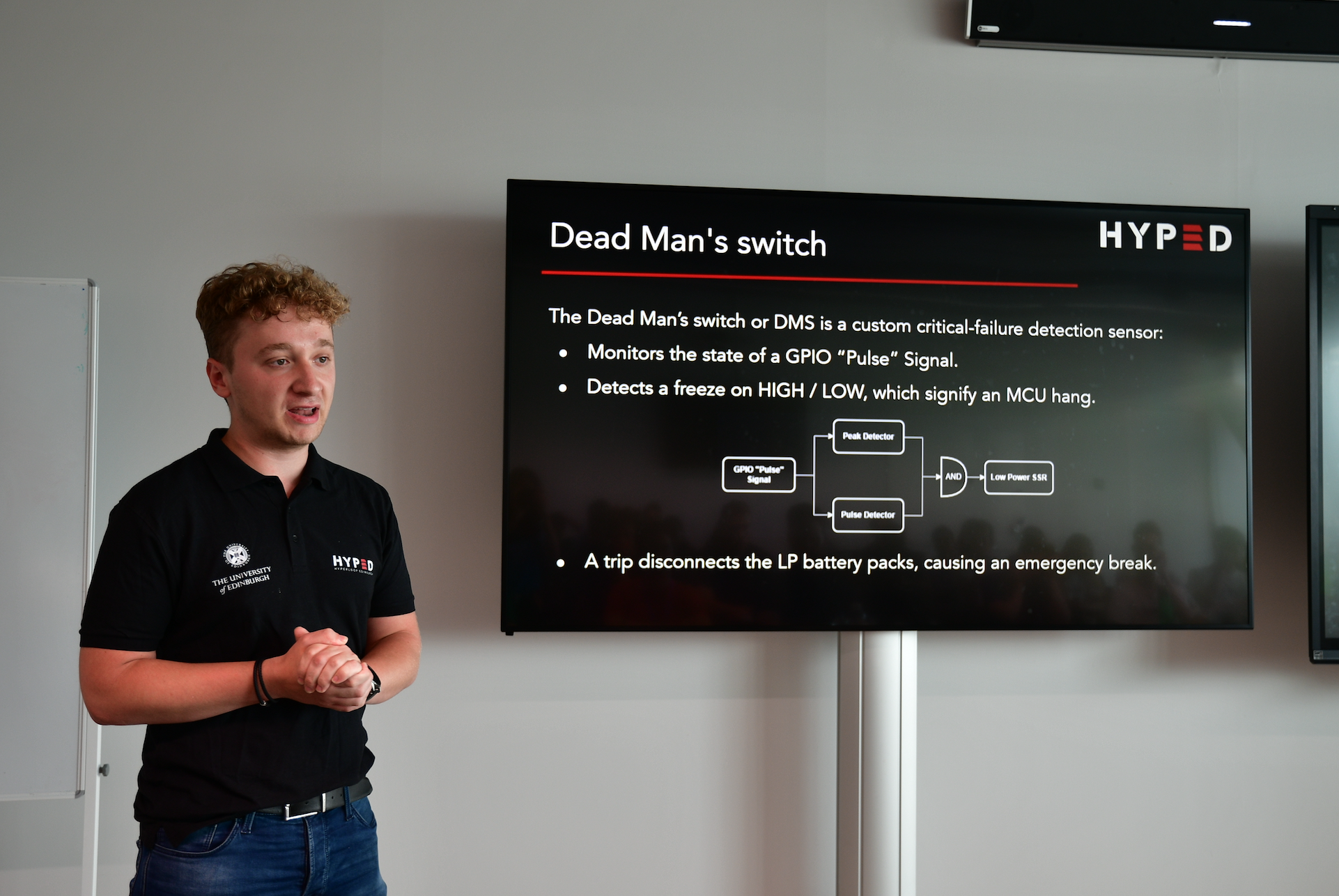 During the conference, several companies, organisations and industry professionals introduced the audience to their approach to Hyperloop development and scalability processes. The daily expert and student panels discussed a wide range of topics including the socioeconomic impact of Hyperloop implementation, cross-border challenges, and infrastructure standardisation. Our President, Stella Antonogiannaki, participated on the student panel about Cross-border challenges and opportunities of sustainable hyperloop systems. The discussion covered the difficulties of designing a Hyperloop network across multiple countries, primarily cross-system incompatibility. Stella supported the view that standardisation at an appropriate stage of technological development is the best solution for this.
The student team presentation series kicked off on Tuesday the 19th, with our Technical and Research teams taking part in the Design Competition. The Technical Team, led by Bertie Whiteford and Eralp Calhan, presented our latest pod prototype, Greyfriars Poddy, to the technical jury, defending our subsystem designs in search for the subsystem and Complete Pod Design awards. The team managed to respond to the challenging inquiries from the technical jury, who searched for scalable and innovative aspects of the designs. The team took the opportunity to collect external feedback from the industry experts which will be fed forward to future technical designs.
Although Greyfriars Poddy was not able to be demonstrated on the track, it was still presented to the public during the demonstration day and the partners’ market. HYPED plans to continue testing in the fall for an upcoming Test Track Event at King’s Buildings on the UK’s first 100 m Hyperloop test track.
The final exhibition took place on the weekend of EHW, during which several teams demonstrated their Hyperloop pod prototype concepts on test tracks. Multiple prototypes were tested in Hilversum and assessed in terms of reliability and ingenuity. The public were introduced to the applications of STEM subjects, the Hyperloop concept and, most importantly, its tangible feasibility as the fifth mode of transportation.
Then came the awards ceremony, at which HYPED, out of 21 participating teams, was Top Three Finalists for the Full-Scale Award in Technical Aspects of Hyperloop Systems and Top Five Finalists for the Mechanical Subsystem Award. The knowledge and experience gained during this week places the team in a privileged position to continue researching and developing the technology necessary to make Hyperloop a reality.
HYPED is proud to be one of the co-organising teams of the European Hyperloop Week, furthering Hyperloop development and creating an ecosystem in Europe. The team looks forward to another year of further innovation to present their work at EHW 2023. It was truly an honour to partake in this year’s event and to engage with both the student teams and the industry representatives. HYPED are committed to continuing the work done throughout these months and we are all excited about what lies ahead.

For more information check out: European Hyperloop Week
Our members successfully presented countless weeks of research, technical development, manufacturing, and testing alongside their demanding degrees to the technical jury.However, EHW was not only an opportunity to compete with world-renowned university teams, but also a chance to interact and learn from other counterparts. HYPED members frequently engaged in insightful conversations which led to discussing individual design processes and creative solutions to the implementation of a high-performing Hyperloop network. Both the participating students and experts found common ground in their views regarding the importance of collaboration to bridge the gap across infrastructure design and standardisation processes.
Our Research Team, led by Vivian Owusu, presented their year’s work to the technical jury and defended their paper titled “Feasibility Study of Suspension and Levitation Systems for a Hyperloop System.” The paper investigates the feasibility of four suspension/levitation systems that have been considered to be integrated into Hyperloop, with respect to mechanisms, costs, and commercialisation. These systems are wheel-on-rail suspension (WRS), electrodynamic suspension (EDS), electromagnetic suspension (EMS), and electrodynamic wheels (EDW).
This year’s European Hyperloop Week (EHW) was held in Delft, in the province of South Holland. After last year’s success in organising the event in Valencia, HYPED, the University of Edinburgh’s Hyperloop team, flew to the Netherlands to take part in the event’s second edition.